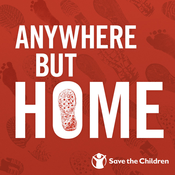 About Anywhere but Home

Anywhere but Homeis a six-episode audio drama based on true stories of incredible journeys. From South Sudan where a sick baby is found hidden under a pile of leaves, to a town in Syria, where an old woman sets out on a epic journey to bring her grandchildren to safety. Anywhere but Home brings you inspiring stories of courage, resilience and hope. Anywhere but Home is brought to you by Save the Children. Stories read by actors including Michael Smiley (Kill List, The Lobster, Free Fire), Zoe Tapper (Mr Selfridge and Liar), Emma Cunniffe (Royal Shakespeare Company) and Ahd Kamal (Collateral, Wadjda).Written, created and directed by Alexia Singh; produced by Natasha Coleman; sound design, editing and music by Nikky French; casting by Meryl&amp;Leslie; script editing Ben Lambert. Recorded at The Blue Studios and One Louder Studios