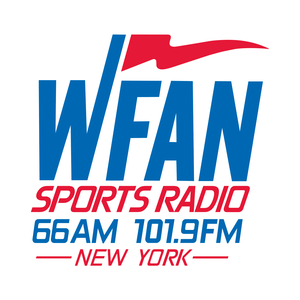 WFAN Radio is the world's first 24-hour all-sports radio station and remains on top of the standings. It is the premier source for all the intel on the New York Major League sports teams from the NFL, MLB, NBA, and the NHL. Get all the game-day info for the New York Yankees and New York Mets, the latest trade chatter around the New York Knicks and Brooklyn Nets, and the best draft analysis for the New York Giants and New York Jets. WFAN is the official live broadcaster for all New York Yankees, Brooklyn Nets, and NY Giants games. The channel provides sports teams. WFAN also offers a variety of talk shows, featuring renowned sports personalities such as Mike Francesa, Boomer Esiason and more. Listeners can tune in to WFAN for live play-by-play coverage of the games, expert analysis and commentary, and in-depth reporting on the latest news and developments. The station's team of experts, reporters, and hosts offer an inside look at the teams and athletes that New York sports fans care about the most. The station's talk radio programs are diverse, featuring a variety of topics. The shows cover politics, business, finance, technology, entertainment, and much more. Listeners can expect to hear from top experts in their fields, as well as prominent political figures, business leaders and other notable guests. Beyond just sports coverage, WFAN is also an active member of the local community, with a commitment to supporting and highlighting local causes, organizations and events. The station regularly organizes events, live broadcasts, and interactive activities that allow fans to connect with the station and with their favorite teams, coaches and players. Tune in to WFAN for unparalleled access to the latest sports news, analysis, and commentary from New York's premier sports radio station.